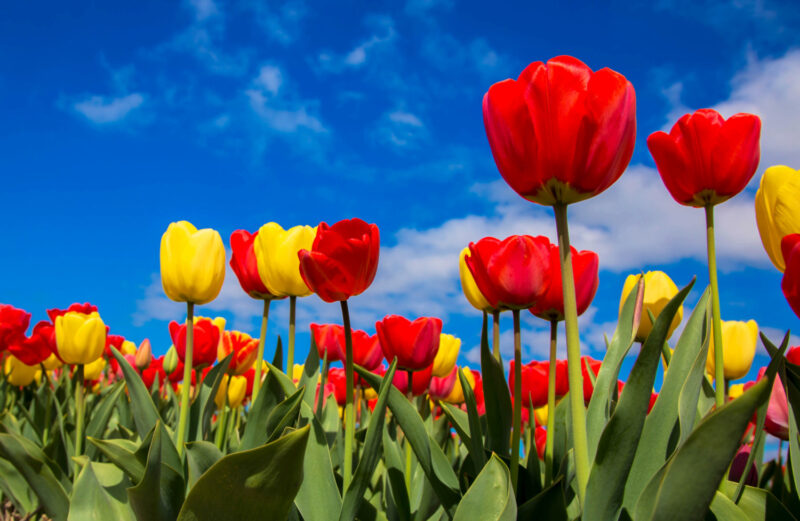 The Netherlands is the epicenter of tulip bulb production. This little country exports almost 2.5 billion tulip bulbs to other countries every year. Having the perfect soil for bulb production is what allows Dutch growers to achieve these numbers. And this is a good thing because people all over the world look forward to enjoying these colorful harbingers of spring.

The 2.5 billion tulips bulbs that the Netherlands exports consist of 8,000 varieties. The 23 most important varieties make up 40 percent of the tulip bulb production and are sold in garden centers or used for flower production. Of all of them, the yellow ‘Strong Gold’ is by far the most popular tulip variety. ‘Leen van der Mark’, a red and white tulip, is in second place.

It was in the early seventeenth century that a phenomenon known as “tulip mania” broke out. In a very short time, tulip bulbs could become highly valuable items. They were sold on paper for huge sums while the bulb was often still in the ground. During this tulip craze, a single tulip bulb could be worth as much as an entire canalside property in Amsterdam.

Tulips come in almost every color of the rainbow: yellow, green, red, orange, purple, pink and even varieties with more than one color. The only colors missing are blue and true black. Although some varieties approach black, they are actually a deep aubergine. ´Queen of Night´ comes closest, but even this tulip isn’t really black.

Did you know that tulips are categorized into fifteen different groups? This makes them easier to find among the huge assortment of tulips. Their flowering period and flower shape determine how they are grouped: there are single flowered, double flowered, fringed, lily flowered, species and parrot tulips as well as early-flowering and late-flowering tulips.

6. The joy of spring

Tulips mean springtime. After those cold dark winter months, these are the flowers that bring that longed-for cheerfulness to our streets and gardens. Their sparkling colors and opening flower buds are enough to make us smile. They start flowering in March. When you say tulips, everyone thinks of spring!

Despite the many varieties of tulips we have, new ones are constantly being developed. This breeding involves crossing tulips with excellent characteristics to obtain new cultivars. It could still happen that a new color or shape will be discovered – maybe even that coveted black tulip. But it will take twenty years before a new cultivar appears in garden centers.

If you choose your varieties wisely, you can enjoy tulips in your garden from early March to the end of May. To do this, plant tulips that have a range of flowering periods. You could also plant them in layers – a method known as lasagna planting. Once the tulips have finished flowering at the end of May, the perennials and annual bedding plants will start providing color.

Did you know that some tulips will emerge and flower – and even increase in number – year after year? These are the species tulips and are sometimes referred to as ‘dwarf tulips’ because of their size and height as compared to other tulips. They are real early birds because most species tulips are the earliest of all the tulips to bloom. The most familiar of these are Tulipa sylvestris, T. tarda and T. turkestanica.

If you have a balcony or patio, you, too, can enjoy tulips. After all, these flower bulbs are perfect for planting in pots. It’s important, however, to use pots that are at least six times as tall as the flower bulb itself. This way, there will be a layer of soil both above and under the tulip bulbs which is three times the height of the bulbs. Also make sure that the pot has a hole at the bottom so that excess water can drain away.